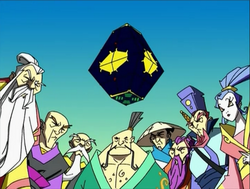 The Immortals are eight warriors from Chinese legend. In the series they banished the eight Demon Sorcerers to the Netherworld and locked their portals with the Pan'ku Box. However, in their symbols was a portion of the banished Demon's chi that could enable anyone with its power.

The Eight Immortals are actual figures from Chinese legend (Taoism, specifically), being eight individuals who attained immortality and various other magical powers by various means, usually as rewards after being tested by a Taoist sage Lao Tzu or another immortal. The magical weapons and items used to banish the Demon Sorcerers in the second season are also associated with them.

In the Demon World Arc, Shendu wrote in the Book of Ages that all the eight Demon Sorcerers were never banished to the Netherworld, altering history causing the banishment never occurred. Curiously, their symbolic items were still capable of banishing the demons. This meant that they acted behind the scene to ensure the demons will still be banished regardless the historical alteration. This can be seen in the banishment chi spells were easier to perform such as the Immortal symbols conjured up a portal that pulled the demons inexorably back into the Netherworld, not to mention chi spell ingredients were no longer required.

Retrieved from "https://jackiechanadventures.fandom.com/wiki/The_Eight_Immortals?oldid=22610"
Community content is available under CC-BY-SA unless otherwise noted.