Sarah Chan was a young woman from Hong Kong who arrived to America to live with her uncle. The niece was envisioned as Jade Chan (at her insistence) in Jackie's telling of the novel The Hong Kong Kid.

She either resembles Jade or is very tall and 15 years old. She has Jade's personality, being clever, getting into trouble, and is adventurous.

The Niece arrived to America by the time her uncle became the sheriff of the town. The Niece accompanied him on his job and even appointed herself as deputy. He got her to speak with the Mayor after one of the prison cells collapsed. She overheard the Mayor plotting a heist and was caught, but she managed to get out of it by pretending to only speak Chinese. She pointed her Uncle over to the wise old peddler when he was challenged to a showdown with the Mayor and his cronies. The Niece and the peddler saved the Hong Kong Kid from the Mayor when the peddler used his concoction to disarm him.

She later joined the peddler and her uncle on their new journeys in the old west, working as the peddler's assistant which involved making him tea. 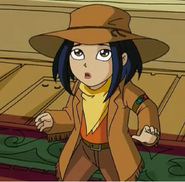 This is how she (most likely) actually looked.
Add a photo to this gallery

Retrieved from "https://jackiechanadventures.fandom.com/wiki/Sarah_Chan?oldid=25392"
Community content is available under CC-BY-SA unless otherwise noted.