Po Kong is the Demon Sorceress of Mountain who hailed from a family consisting of herself as well as seven siblings and later on her nephew Drago.

The Demon Sorceress of Mountain, she was banished by the Immortal Zhang Guo Lao. Po Kong's portal is located in her former domain of Japan. It is, like several other doors, contained within a regular door.

When she was released, she attempted to devour Jackie. However, she was overwhelmed by an army of Jades created by a faulty cloning spell. Using a drum found at the site, the Chans then banished her once more.

Po Kong appeared in Demon World Part 2, where she rules Japan and forces many to work in salt mines for her meals. She attempted to devour them again. However, Tohru was enslaved in her domain, and aided the Chans by banging on a nearby drum to banish her.

Po Kong's Chi was located in Quebec, within a pair of chopsticks, made from the Immortal drumsticks that banished Po Kong. Tohru accidentally absorbed the Chi when he used the chopsticks to eat a midnight snack of pork fried rice. Drago managed to very briefly absorb the Chi, but it was drained from him along with his own.

Drago later reabsorbed her Chi with the rest of the Demon Chi in The Powers That Be (Part 2). 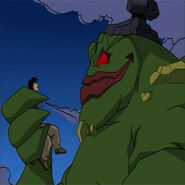