Dragons are reptilian, magical creatures from various folklores around the world.

It's implied that various kinds of dragon exist in the universe of Jackie Chan Adventures. Shendu controls an army of bestial, evil-aligned Dragon Minions which can only be summoned to Earth from another dimension (via a spell known only to Shendu and later Drago). A Noble Dragon was implied to have once existed on Earth to house the Noble Dragon power. The Demon Sorcerer Shendu and his son Drago are considered by themselves and others to be literal dragons (rather than merely demons with dragon-like traits, compared to how Shendu's demon siblings all possess differing traits from various animals); a belief apparently verified by how Shendu's resurrection triggered the Chan Clan's dragon-locating spell and drew the disembodied Noble Dragon power to him.

Barring Shendu - and later Drago and the Fire Demon Chi-empowered Ice Crew, before the former two individuals were banished to the Netherworld and the latter stripped of their Demon Chi - dragons are extinct on present day Earth, as revealed in Re-Enter the Dragon. Though Shendu's Dragon Minions still exist in their native dimension. Dragon body parts such as dragon teeth can be powerful spell ingredients, and can only be destroyed with magic.

Shendu's Dragon Minions are a mixture of the Chinese and European styles, with various features from both mythologies mingled; such as serpentine bodies, whiskers and fins from Chinese tradition; but they also have wings for flying, horns, the ability to breathe fire, and the evil alignment that most (though not all) dragons of European tradition possess. They also have red-glowing eyes similar to other evil-aligned creatures.

Shendu and Drago are bipedal, wingless and incapable of flight (unless in possession of the Rooster Talisman or Demon Chi), but incorporate the aforementioned spikes, fins, fire-breath and reptilian biology; they are also sentient and capable of speech, but are evil-aligned. Drago indicated the unique abilities granted when he transferred his Fire Demon Chi to humans (super-speed, super-strength, heat-beam eyes and forming fireballs) were Dragon traits rather than Demon Sorcerer traits or Talisman-related. 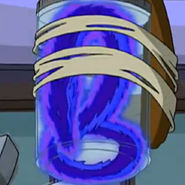 Add a photo to this gallery
Retrieved from "https://jackiechanadventures.fandom.com/wiki/Dragons?oldid=25768"
Community content is available under CC-BY-SA unless otherwise noted.