Jackie Chan found the Armor in an abandoned mountainside temple in China at the behest of Uncle to study its magical properties. Due to Uncle's insistence, Jackie later used the Armor in Spain to fight the Demon Sorcerer of Earth, Dai Gui.

The Armor grants the wearer superhuman strength, endurance, agility and flight. When Jackie wore the armor, it transformed itself into a skin-tight suit perfectly accustomed to his body seconds after he put it on. With it, he was able to engage in a hand-to-hand fight with Dai Gui (a demon many times his own size) long enough to keep him busy and could also survive having a giant boulder dropped on him before tossing it aside without any injuries sustained afterwards. 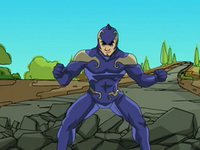 Retrieved from "https://jackiechanadventures.fandom.com/wiki/Armor_of_the_Eight_Immortals?oldid=26653"
Community content is available under CC-BY-SA unless otherwise noted.